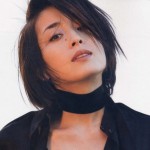 Rie Miyazawa began acting and modeling at the age of 11 with an advertisement for Kit Kat. Her film debut in Seven Days’ War (1988) earned her a nod from the Nippon Academy-shō Association for Newcomer of the Year. Already a well known face, her 1991 nude photo book, Santa Fe, sold over 1.5 million copies within its first few months, making it one of the best-selling and most well known nude photo books in Japan.

Her engagement to sumo champion Takanohana dissolved, however, resulting in a period of depression and scandal, but she continued to hone her acting craft and get her life back on track. She moved to California and continued to work on stage, television, and film. In 2003, Miyazawa won her second Japanese Academy Award, this time for Best Actress in The Twilight Samurai. 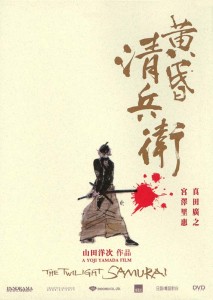 Movie Poster for The Twilight Samurai (2002)

Hiroyuki Sanada (Ringu, Sunshine) is Seibei Iguchi, nicknamed “Twilight” by his fellow samurai for his practice of running home at dusk rather than joining them for drinks at day’s end. Seibei takes his domestic responsibilities seriously, however, widowed as he is while taking care of two young daughters and his senile mother. He doesn’t have the time nor money for regular baths, let alone sake and geishas.

Seibei and his co-workers are bound to their clan by vows of honor, but their duties primarily consist of administering the castle granary. In this first installment in his Samurai Trilogy, director Yôji Yamada painstakingly recreates the world of samurai bureaucrats as it existed just prior to the Meiji Restoration. Seibei’s friend Iinuma (Mitsuru Fukikoshi) returns from Kyoto with stories of idle ronin beheading each other on the streets. During their discussion, they witness retainers training with rifles. The samurai era is clearly entering its own twilight.

Iinuma brings some other important news home to Seibei, almost as an afterthought. He has arranged a divorce for his sister Tomoe (Rie Miyazawa) from Toyotaro Koda, an abusive drunk, but the son of an influential captain and a 1200-koku samurai. Seibei earns a mere 50-koku stipend, with 20 bespoken to cover his wife’s funeral, for a net 30. He has loved Tomoe since they were childhood friends, but has always been aware that he is far below her station. 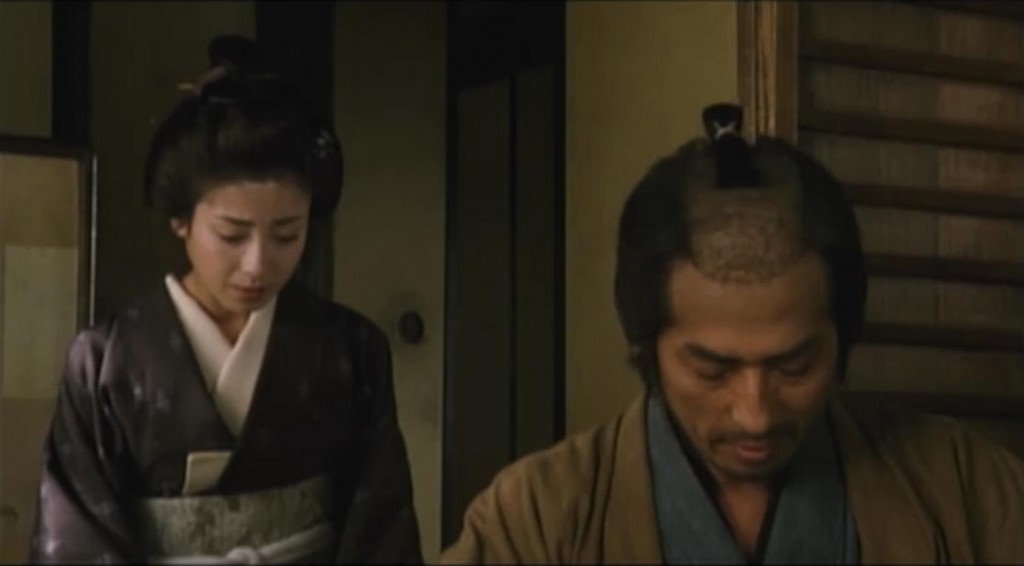 Rie Miyazawa and Hiroyuki Sanada in The Twilight Samurai (2002)
The difference in their kimonos highlights the gap between their social stations.

What follows is a beautiful film, rich with subtext and subtle detail. Seibei is caught between his social obligations as a samurai, obligations he would gladly give up to become a peasant farmer, and his personal responsibilities to his family. His choices are clear when the two come into conflict, and it is only when the former threatens the latter that he is forced to draw his blade once more.

This is not an action-packed samurai film by any measure, but neither is it a treacly romantic fable. This is one man’s life, narrated by one of his daughters with loving candor. There are complications and revelations which propel the plot forward, and it is clear to me why this film won an unprecedented 12 Japanese Academy Awards and received the first Oscar nomination for a Japanese film in 22 years.

The opening of Ashura is reminiscent to me of an entry in the Blade franchise. A trio of Demon Wardens ride into 16th century Edo and set about dispatching their underworld foes. Instead of vampires getting sliced and turning into cinders of ash, these foul cretins explode in gibbets of fluorescent green goo. The whole thing is garish and laughable, but that’s what you get when you bring the broad fanciful strokes of kabuki theatre to film.


After our opening sequence, we catch up with Demon Warden Izumo five years later. He has withdrawn from the conflict and is trying his hand at kabuki theatre. Izumo is played by real life kabuki actor Somegorō Ichikawa, who breaks out every crazy-eyed gaze, basso profundo shout, and sly gaze from his melodramatic stage actor’s arsenal.

He soon meets Tsubaki (Rie Miyazawa), one of the Dark Camellias (her name, in fact, translates as “Camellia”). By day, they are an all-girl troupe of traveling acrobats. By night, “they steal, but are not unjust.” During one of her nocturnal activities, Izumo accidentally comes into the possession of Tsubaki’s cherished hair pin, and discovers their fates are inextricably tangled. 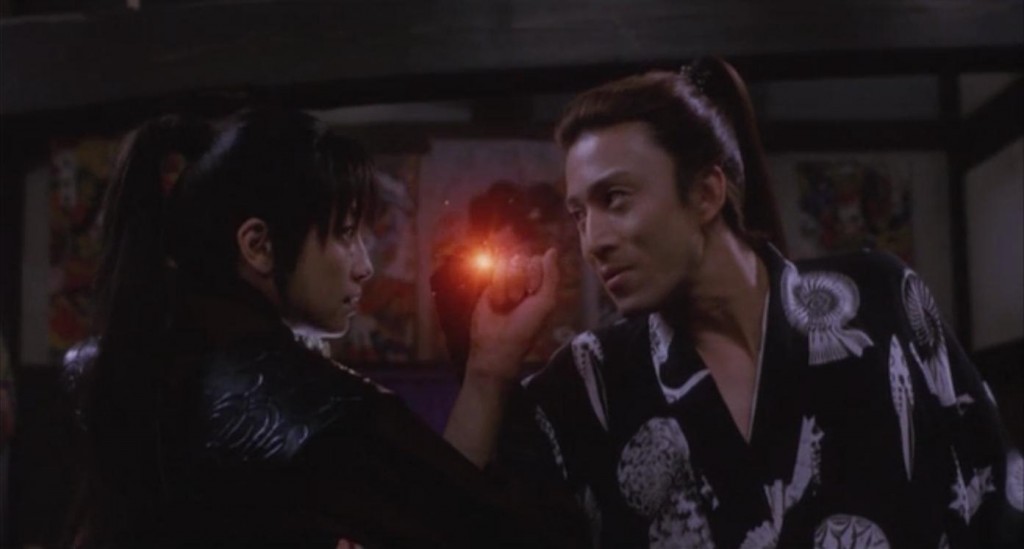 Izumo isn’t the only person interested in Tsubaki’s secrets, however. She is also pursued by Izumo’s former Demon Warden partner Jaku, the Riggs to his Murtaugh. While Izumo has abandoned his cause, Jaku appears to have flipped sides entirely, seduced by promises of power.

When Ashura awakens…
…her invincible castle will float on the upside-down sky…
…and demons will have dominion over the earth.

This power is apparently going to come from the return of Ashura, the demon queen, and the unwitting amnesiac Tsubaki is a key component of this prophecy according to Bizan (Kanako Higuchi). Bizan is an oni, a demon who unfortunately bears more than a passing resemblance to Rita Repulsa. She believes that when Ashura is awakened again, the queen’s faithful servants will be duly rewarded. Once Izumo gets involved on Tsubaki’s behalf, Jaku is drawn even deeper into the scheme, and there are some none-too-subtle nods at unrequited feelings towards his former partner. 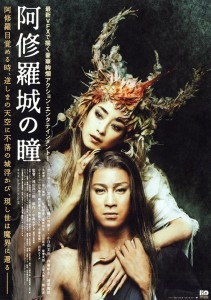 Director Yōjirō Takita (Onmyoji: The Yin Yang Master, When the Last Sword is Drawn) came from humble origins, directing Japanese sexploitation films (pinku eiga) with such classy titles as Molester Train: Rumiko’s Ass. By the time he directed Ashura, Takita had achieved considerable international respectability by receiving three Japanese Academy nominations for Best Director. The fourth time was apparently the charm, as Takita finally won the award for Departures (2008), which also picked up an Oscar for Best Foreign Language Film of the Year.

Some of Ashura borders on the embarrassing, however, and more closely resembles something like Wicked City meets Mortal Kombat than Kwaidan. A particularly egregious example, which may betray the director’s pinku eiga roots, is the steamy love scene, complete with breathy groans, weeping sword wounds, a voyeuristic kabuki theater director, and more expository dialogue than you can shake a kendo stick at. I sadly think this may have played out better as a video game than a feature film.

Supporting Joseph Campbell and his thoughts on the universality of myth, the various plot turns are very predictable even to audiences who aren’t acquainted with Japanese legendry. This isn’t a subtle tale of deep thought and reflection that provides insight into the culture that crafted it. This is kabuki theatre, Grand Guignol, and comic books all thrown together onto the screen. On that level, it’s effective in much the same way that Snow White and the Huntsman is light fun for what it is.

Rie Miyazawa is not just another pretty face. Not content to be famous for simply being famous, she has become a respected actress with a diverse and impressive body of work. I look forward to seeing her again on that silver screen, and today, at WeirdFlix, we celebrate her birthday. Many thanks and best wishes always.