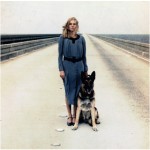 Dickie is a service animal, a guide dog for Emily, the mysterious blind woman who lives in the big old mansion by the crossroads.
Or does she?

Director Lucio Fulci is perhaps best known for Zombi 2, his unofficial sequel to Romero’s Dawn of the Dead. The Beyond (1981) superficially appears to be yet another entry into the zombie apocalypse genre, but it is actually much more supernatural and metaphysical than any mere tale of shambling undead. The premise is more akin to something like that same year’s The Evil Dead or the Silent Hill videogames.

Instead of creating his own mythology, however, Fulci draws upon the Lovecraft circle of writers and the infamous Cthulhu Mythos. The literary MacGuffin here is not the oft-abused Necronomicon of Lovecraft, but The Book of Eibon, created by his contemporary pen pal, Clark Ashton Smith. The film’s sepia-toned opening flashback sequence is set in 1927, the heyday of Lovecraftian horror. The Book of Eibon is seen here in the possession of an artist named Schweick (Antoine Saint-John).

“Woe be unto him who opens one of the seven gateways to Hell, because through that gateway, evil will invade the world.” — The Book of Eibon according to Lucio Fulci…

In a scene straight out of Lovecraft’s own short story “The Call of Cthulhu”, Schweick is attacked by a torch-bearing bayou lynch mob who think him a warlock and blame him for their ill fortune. Sadly, it seems more apparent that Schweick is guarding one of the seven doors to Hell and has indeed been to the other side and back. During this period, Emily (Cinzia Monreale, billed as “Sarah Keller”) appears to serve as an apprentice of sorts, still retains her sight, and somehow escapes the wrath of the angry mob, perhaps into The Beyond itself…

The Fabio Frizzi soundtrack helps bridge the gap from past to present and might be a little 1980s synth-heavy and dated, but it has a haunting charm all its own. 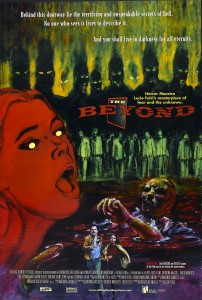 In 1981, we are introduced to our protagonist, Liza Merrill (Catriona “Katherine” MacColl). Liza has just inherited the Seven Gates Hotel in “The Big Easy”. The restoration efforts aren’t going well, and the accidents and bodies don’t take long to pile up, especially once “Joe the Plumber” (Tonino Pulci) starts tearing down basement walls in a city notoriously known for being under sea level.

Fulci uses the Symbol of Jupiter as a recurring Elder Sign, having it displayed prominently on the basement walls of the hotel, in the Book of Eibon, and even carved into Schweick’s own flesh. While it may serve as a charm against evil, there are other clues that actions to undermine the guardianship of Schweick and Emily are underway. Liza finds a creepy servant rummaging around her room “looking for keys”. In another bit of obvious symbolism, Liza encounters Emily and her dog Dickie on a bridge, where Emily begins to warn her about the dangers lurking under the hotel.

As the story unfolds, Dr. John McCabe (David Warbeck) begins his own investigations into the deaths and the mystery surrounding the hotel. There are numerous clues that Emily isn’t all that she appears, and things begin spiraling out of control, blurring the boundaries between the lands of the living and the dead.

If the end of this scene is to be believed, the human ear is a soft tortellini stuffed with blood. Tasty.

Lucio Fulci may have set out to create a metaphysical chiller, but his investors saw the dollar signs attached to the zombie craze and had other plans, forcing him to shoehorn in a zombie apocalypse that doesn’t gel well with the rest of the film. It feels like the bastard offspring of John Carpenter’s The Fog, In the Mouth of Madness, and Prince of Darkness, though it’s obvious both Carpenter and Fulci were influenced by Lovecraft and similar material. The end result feels more like an ode to eye trauma than a deep philosophical discussion of the nature of life and death.

Fulci’s departure from conventional zombie tropes and his desires to pay homage to French surrealist playwright Antonin Armaud have obviously confused many gorehounds, leading to a number of strange theories and misconceptions. I’ve seen a synopsis that refers to Schweick’s attackers throwing lava at him. Where a New Orleans lynch mob would acquire lava is anyone’s guess, but it is clearly quicklime or lye, both readily available to rural working class folk of 1927. The film has plenty of clever touches to draw conclusions from, but I’ve seen some “explanations” that involve creating entire backstories and sets of rules for Schweick, Emily, and the hotel that don’t bear any resemblance to the material actually in the film. 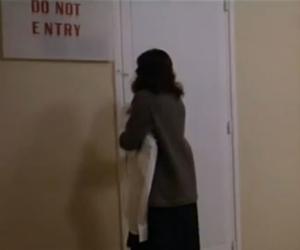 There is also an annoying trend of playing apologist for the film’s obvious flaws. While The Beyond contains more than its fair share of creative imagery and does a decent job capturing the mood of doom and dread prevalent in Lovecraft and his peers, Fulci makes a couple of creative choices that don’t really lend themselves to easy explanations.

After a foreshadowing scene in which a doctor doesn’t notice that his brainwave gadget (looks like an oscilloscope) is registering brainwaves on corpses, our protagonist clearly can’t get a grasp on the fact that every time he shoots one of the living dead in the skull, it stops attacking him. He goes through a frustrating routine of headshot-body-body-body-body-headshot without taking any time to aim at the shambling horde. There’s also a glimpse of him trying to reload by dropping a shell down the barrel, but by that point, the stupid train has already left the station.

Attempts by fans to explain this behavior as “nightmarish” and “surreal” are obfuscating the issue. Nightmarish would be guns that don’t work, zombies that aren’t locked into a stumbling shamble, shifting and unreliable perceptions, or living dead that simply don’t die from headshots. Fulci’s surrealist vision isn’t the explanation for a hospital sign that reads “Do Not Entry”. Occam’s razor slices straight to laziness.

“And you will face the sea of darkness and all therein that may be explored.” — The Book of Eibon

Okay, so some real life intrusions and a frustrating WordPress update have resulted in an unplanned one month hiatus. We may no longer be in the literal “Dog Days of Summer”, but we’re still going to “let the dogs out” three more times as we count down “A Dozen Diabolical Dogs”. I hope you’ll join us.