In the not too distant past… Last Tuesday, A.D. 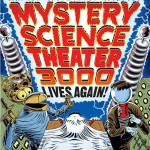 My wife and I had the privilege of seeing the pilot episode (“Experiment 1101″) of Mystery Science Theater 3000 Season 11 at the “Red Carpet Backer Screening” in New York City last week. It was the capper to a truly awesome Valentine’s Day spent with the love of my life and my soul mate. I am a fortunate man, indeed.

Before we get to the event itself, I do want to take a moment to commend the West End Bar & Grill in Hell’s Kitchen. Not only did they not balk at two weirdos in costume waltzing in for an early romantic dinner, they presented us with great service and the best food and drink of the trip. Definitely check them out the next time you’re in midtown Manhattan. I know they’re on our shortlist of places to revisit in NYC.

Regarding Experiment 1101… Well, not much I can say, really, without violating the NDA we signed. Dude, it was rad! In all seriousness, I think everyone involved did an amazing job and the new season looks to retain everything that made MST3K one of my favorite things. 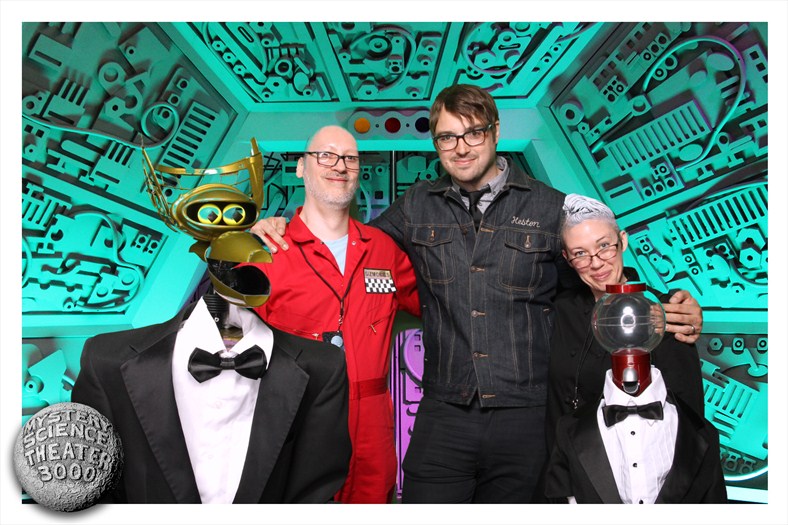 Ray and Jess with Jonah Ray, Crow, and Tom Servo at the MST3K New York Screening afterparty.
(Check out that embroidered “Heston” on Jonah’s shirt. Didn’t notice that before today.)

Admittedly, I was unfamiliar with Jonah Ray when he was announced as the new host of MST3K (“Jonah Heston”), but an endorsement from Joel Hodgson carries a lot of weight. His name came up again while doing some research and planning to attend Fantastic Fest 2016 in Austin, TX. There, I made it a point to check out The Meltdown with Jonah and Kumail, the stand-up showcase Jonah Ray and Kumail Nanjiani hosted out of the back of Meltdown Comics in L.A. transplanted to the Highball in the Austin South Lamar Alamo Drafthouse. It was a blast (as was the whole festival, really), and I was officially excited about Jonah Ray joining the MST3K family.

I typically seize up at words like “afterparty” or “mixer.” My hearing isn’t the greatest under the best of circumstances, and in events like this, I tend to get overwhelmed and withdrawn. Even when people do engage me in conversation, it can be difficult for me to keep up. That being said, we had a great time meeting Joel, Jonah Ray, and Baron Vaughn (the new voice of Tom Servo) as well as our fellow MSTies. Everyone was warm, friendly, and excited about the upcoming season.

I’m hoping we’ll get the chance to see Jonah Ray at Fantastic Fest again this year. While The Meltdown with Jonah and Kumail may be no more (it ended its final season in November, 2016), there’s still the possibility of a stand-up event or maybe even a film screening of some sort with Jonah and/or Kumail. Fantastic Fest is full of surprises, so who knows?

No trip to the Big Apple is complete without a little danger. Imagine our surprise when, upon returning to Penn Station a little bit inebriated and a whole lot exhausted at around 1:40 a.m., we discovered the next train to New Jersey wouldn’t be departing until 4:17 a.m. Happy Valentine’s Day, honey!

Now, two people in MST3K costumes were unsurprisingly not the strangest looking folks in Penn Station at that time of the morning. I think there may have been someone with a sweet Torgo costume, but I wasn’t going to approach to confirm. I also apparently missed a “pants-off dance off” by being unobservant, but I don’t know if “missed” is the right term. Maybe “narrowly avoided” is more accurate.

Anyways, we’re back, and I hope you’ll come back and join us when next we have “Movie sign!” Until then, fare thee well!