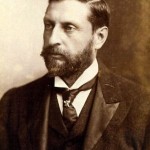 While working reluctantly as a barrister in London, H. Rider Haggard took to writing novels and found them more rewarding, personally and financially, than practicing law. King Solomon’s Mines was influenced by his time in Colonial Africa alongside such notable explorers and “Great White Hunters” as Frederick Selous. With his slouch hat perched on the back of his head and full beard, Selous was the archetype for such adventurers as Indiana Jones and Haggard’s own creation, Allan Quatermain.

Hal Lawrence was the first to take on the role of Allan Quatermain in King Solomon’s Mines (1918) and Allan Quatermain (1919). Haggard was able to attend a private screening of the second film and wrote down his initial reactions in his diary. “It is not at all bad,” he writes, “but it might be a great deal better.” No prints of the films remain, but a South African film archive has some preserved stills.

The first major film adaptation of King Solomon’s Mines was completed in 1937 with Sir Cedric Hardwicke as Allan. A few concessions were made to see the film to the screen. The interracial romance was predictably dropped and replaced with a white female lead played by Anna Lee. As the noble savage Umbopa, the already wildly popular Paul Robeson is given a few musical numbers clearly not conceived by Haggard. 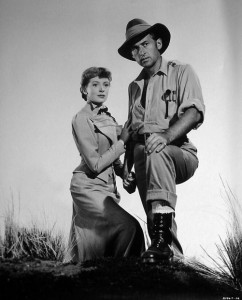 The 1950 film version of King Solomon’s Mines starring Deborah Kerr and Stewart Granger strayed even further from the novel, giving the fabricated female lead role top billing, but it was arguably the most successful. With no score and enough location footage to supply MGM with stock for decades, this version scored three Oscar nominations, including Best Picture, winning two for Best Cinematography (Color) and Best Film Editing.

MGM tried to recapture the allure of darkest Africa with a sequel, Watusi (1959), but without the chemistry of Kerr and Granger and nowhere near the budget, the results pale. George Montgomery is forced to play Harry Quatermain, son of Allan. New location footage is limited, and the film recycles stock from its predecessor.

Allan Quatermain would lay dormant until the late 1970s. While Amicus was adapting the Lost World fiction of Edgar Rice Burroughs (see our coverage of At the Earth’s Core), veteran TV director Alvin Rakoff decided to make his push into theatrical releases with a series of UK/Canadian genre co-productions. King Solomon’s Treasure (1979) is beyond low budget despite starring David McCallum (The Man from U.N.C.L.E., NCIS), Patrick MacNee (ABC/ITV television series The Avengers), and Britt Eklund (The Man with the Golden Gun) in supporting roles. Greek-Canadian stage actor John Colicos (Count Baltar from the original Battlestar Galactica) stars as Allan Quatermain. The film is full of dodgy special effects, including dinosaurs, giant crabs, and a lost city of styrofoam. 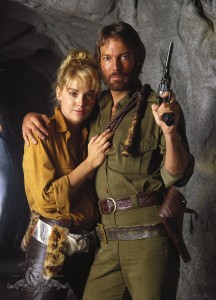 Certainly, the overwhelming success of the pulp-inspired Raiders of the Lost Ark caused a resurgence of interest in Allan Quatermain and his ilk. Unfortunately, this caused the character to become even more diluted as filmmakers were focused on capturing a taste of Indiana Jones’ box office rather than draw from his predecessors.

King Solomon’s Mines returned to theaters in 1985 with Richard Chamberlain playing Quatermain. Filmed back-to-back with its sequel to cut costs, the film’s disappointing box office returns didn’t stop Allan Quatermain and the Lost City of Gold from following a couple years later. Director J. Lee Thompson didn’t receive credit for the sequel, but it didn’t matter much, because he was busy filming the even MORE derivative Firewalker (1986) with Chuck Norris.

Somehow, John Rhys-Davies managed to be in Raiders, Mines, AND Firewalker and avoid being typecast so deftly that he would go on to play a damn dwarf.

In the Information Age of the 1990s, period adventure pics were largely forgotten along with Haggard’s creations. The Mummy was originally intended to rebout the Universal Monsters franchise, but the tone of high adventure did more to lure in audiences than the titular monster. The descriptively titled High Adventure (2001) followed on its heels with an unofficial (and, some would say, unnecessary) sequel to the King Solomon’s Mines/Watusi series, making it a trilogy. Following the theme of its previous installments, Thomas Ian Griffith (The Karate Kid, Part III) plays Allan’s grandson, Chris Quatermain. The budget is low, the action tepid, and the connection to Haggard tenuous at best. 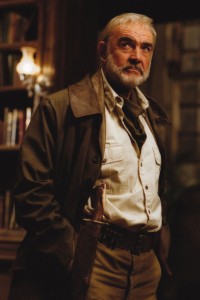 The 2000s have been even more unkind. Despite making over $100M, The League of Extraordinary Gentlemen (2003) largely disappointed both audiences and critics, but none more directly than comics writer Alan Moore and star Sean Connery, who played Allan Quatermain. Patrick Swayze took a turn in yet another version of King Solomon’s Mines, this one made-for-TV and nearly three hours long. Sadly, it shows little regard for accuracy, historical or literary, even going so far as to spell his name “Quartermain”. The also made-for-TV Librarian franchise entry Return to King Solomon’s Mines (2006) abandoned both Quatermain and the Victorian timeframe, but at least made direct reference to Quatermain’s route and the fictitious geographical landmarks. Direct-to-video “mockbuster” producers The Asylum managed to tarnish two legends with their half-hearted Allan Quatermain and the Temple of Skulls (2008). Apparently, Mark Verheiden (TimeCop) is writing a spacefaring Quatermain project for Sam Worthington (Avatar), so it doesn’t look like things are going to improve on this front any time soon. I guess I miss the rains down in Africa.</Toto>