Tag Archive for Devil Dog: The Hound of Hell 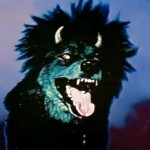